Peaceful White people are being surrounded and set up for extermination by our own security forces and it appears that Obama is funding the project with stolen tax dollars and that Louis Farrakhan’s Nation of Islam is the main organizing group.

The USA is currently under INTERNAL attack by its OWN citizens. This is a war of huge proportions. Sadly, few people realize this and its all happening right under our nose.

Anyone can see the connection between hoax shooting events and the disarming of America.  Now see the connection between the disarming of America and the approaching Islamic Barbarians now piling up in Calais, France. They are on their way to meet the black ex-convict Nation of Islam army already training in Muslim military training camps all over the United States.

If they aren’t stopped in Calais, there is nothing to stop them from entering American shores.  So I would advise people to get smart now.

One realizes with horror that the American police are complicit in aiding the invaders. My own police chief and governor are complicit in the hoax event that occurred recently Lafayette, including the ambulance service and the media. My governor is the son of Muslim immigrants and he ‘converted’ to our locally popular religion. The Muslim handbook tells them to make friends with us in order to kill us. So it is friendly strangers and friendly governors that we have to be wary of.

It’s important to note that this version of Islam is not the traditional religion that Muhammad established.  Islam has been twisted into a strategy for brutal take-over of the Western world and extermination of the white ‘devils’ as they call us openly. Louis Farrakhan teaches this ‘religion’.

When posting information on the internet to warn people, the comments that are left by trolls who defend the hoax include blood curdling death threats. Already in my own neighborhood, I’ve seen some of them in action. If you say or do anything to offend them, even though this person is a friend or neighbor, and believe me it doesn’t take much to offend them, they pull out their Iphone and send the word out that you are a racist. What do you think they’ll do with this list of racists? Racist is a code word for whites who refuse to submit to the supremacy of Radical Muslims and Blacks. And they do want total submission. They don’t all look Arabic and black either. They are recruiting in the prisons so even white boys are joining with them. Such is the insidiousness of propaganda in American schools and entertainment.

In Europe, the police have been betraying their people in order to defend the Muslims for years now. This has created a White Resistance that must remain in hiding.  The voice of White people of Europe is completely eliminated from the media. The Saudi/Jewish controlled media gives Muslims full opportunity, without being interrupted by the reporter, to repeat their lies over and over again, as they pretend to be innocent victims of ‘oppressive white racists’.

The police protect the Muslims even to the point of leaving 1200 young White Christian girls as sex prisoners for them in Britain, despite repeated reports, because no one in the police departments wanted to appear racist and thereby loose their job, or worse.

Militant Muslims are reported to be already infiltrated into the police forces all over America and Europe, according to plan, working with Jewish and other liberal groups to accomplish this. Jews in Europe have made no secret that Muslim immigration into the Christian world is a plan that they sponsor. Prominent Jewish leaders have stated that they are aware that people oppose this ‘diversity’, but they say Whites will just have to accept it because that’s what has been decided for us. Barbara Specter is the person most well known for announcing this, and her statements were taped so don’t accuse me of anti-semitism. What the Jews are not so open about, is who is behind the horrendous Anti-American media campaign that is overwhelming the world right now, inciting radicals to violence and invasion.

There are at least 22 military training camps for radical Islam here in America, one just a very short distance from where I live. The local police cannot enter, and more than one journalist was beheaded for trying to interview them. The videos show them being trained to kill security guards and plant bombs, the goal being to destroy our waterworks and other infrastructure.

This is what Donald Trump is aware of and the reason for wanting a wall. He wasn’t referring to regular Mexicans, he’s talking about the hoards being sent our way for an invasion, fired up against us through the use of propaganda lies.  Propaganda makes use of the False Historical Narrative that every school child learns in the classroom .It is a narrative that unjustly blames white people for a litany of crimes in the distant past that can actually more rightly be attributed to Jews.  But there is no trial or investigation in propaganda.

Trump’s wall won’t be effective if Jewish groups inside the United States let them in. The crime rate in European cities has skyrocketed, but officials and the media are hiding the fact that immigrant Muslims are committing crimes against European women as their war strategy. The media is therefore complicit in this traitorous campaign by providing propaganda services for the enemy.

No woman or girl is safe unless she knows how to defend herself. The only people who can feel safe from this Muslim army are is the American Military, whom they will avoid at all costs. Yes, the Muslims are cowards when it comes to military battle, so they sneak into our nations and attack females. In America I can see signs of their campaign right here in my community. They always hide and they always attack females, either shooting at passing cars or raping someone who has befriended them.  If you find yourself in a confrontation with one of them, notice that they immediately start texting for a group of fellow Islamic gang members who will arrive for back-up.  Don’t stay around and wait for that.

The favorite method of Islamic warfare is rape, so I would advise women all over America and Europe to arm themselves, train in self-defense and be prepared. More over, DO NOT befriend a Muslim.  I am sorry to have to say, but it’s a matter of life and death.  Anyone who is a true traditional Muslim and not part of this radical campaign of death should find themselves another religion. I recommend traditional Catholicism, but that’s just friendly advice. Don’t sit there and say ‘it’s not me’.  Angry Americans will not stop to ask what kind of Muslim you are.

So please beware of the connection between these hoaxes which are a campaign to disarm us, and the goals of the Army of the Nation of Islam, which is a pack of roaches training and hiding within our government agencies and aiming to attack the innocent, apparently with Obama’s approval.

The Muslim military camps are very likely where all the hollow point bullets have been sent that were ordered by DHS. 98% of DHS contracts go to Jewish businesses, according to news reports published in Israel.  The same is true for FEMA.  It is a fact that the secret part of Jewish religion requires that all Christians be dead in order for their Messiah to arrive, so think about that. It isn’t difficult to put two and two together to understand the danger that we are in if we are not aware.

Awareness alone is enough to put an end to this danger.  Being the cowards that they are, they depend on secrecy and betrayal of friends in order to succeed. Every person in America needs to know where the nearest Islamic training camp is located, and these places need to be monitored closely.  For Louisiana, the nearest known camp is reported to be in Sweeny, Texas.

The following two images are copies of internal government memos of a plan to use hoax violence to kick off a war against Cuba in the 1960’s. 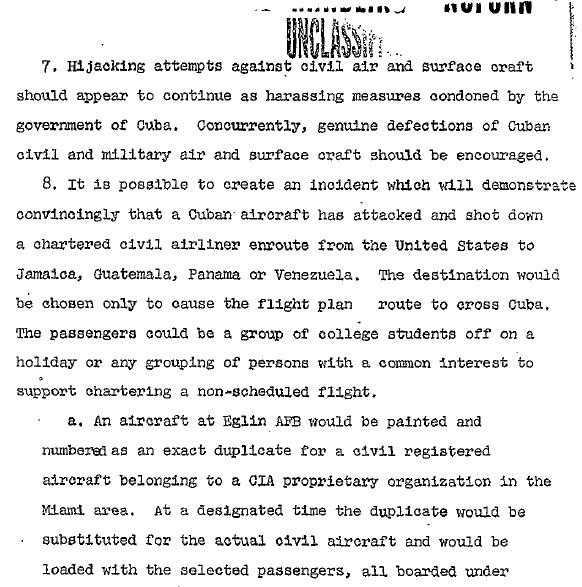