Here are some slow downloads for Christmas eye candy.  These are nativity scenes from the New York Metropolitan Museum of art online.  There are not many of these before around 1300-1400 which I equate with the time when the increase of the Christian population in Christendom was very important.  Before this time the emphasis was on the crucifixion.

Illuminated manuscripts “which are among the finest works of Armenian art as the “Word” have been the primary focus of veneration in the Armenian Church since its founding in the early fourth century. In the fifteenth century under Mongol domination in the region of Khizan near Lake Van (now in Turkey), Armenian artists developed the dramatic narrative style of illumination seen here.  Colophons, notations in the text, identify this gospel as written by the scribe Margar for the Monastery of St. George at Mokk’ at the order of Bishop Sion.  Typical for Armenian gospels, the illuminations of the life of Christ are grouped at the beginning of the text before the Canon Tables with an evangelist’s portrait introducing each gospel. 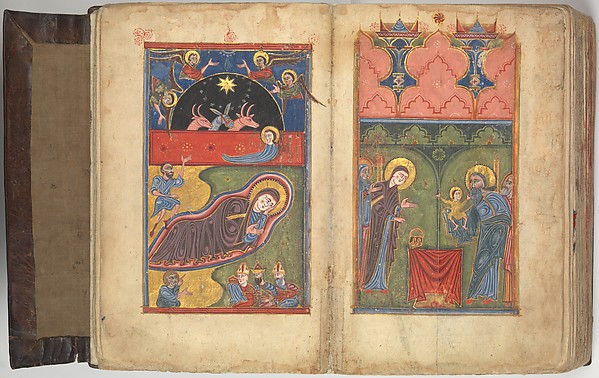 In Italy at around the same time, wealthy patrons sponsored Nativity Scenes from the best artists: 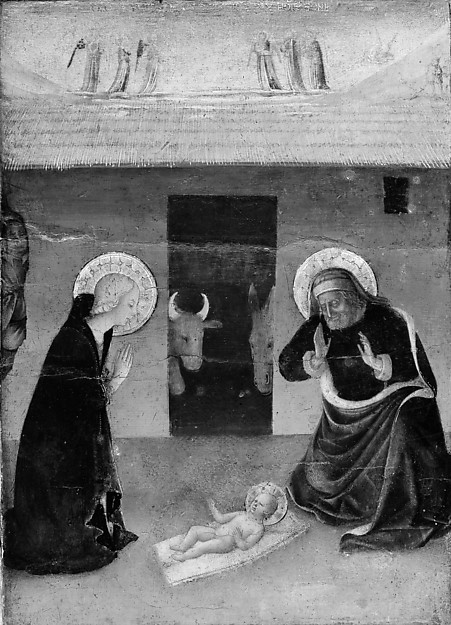 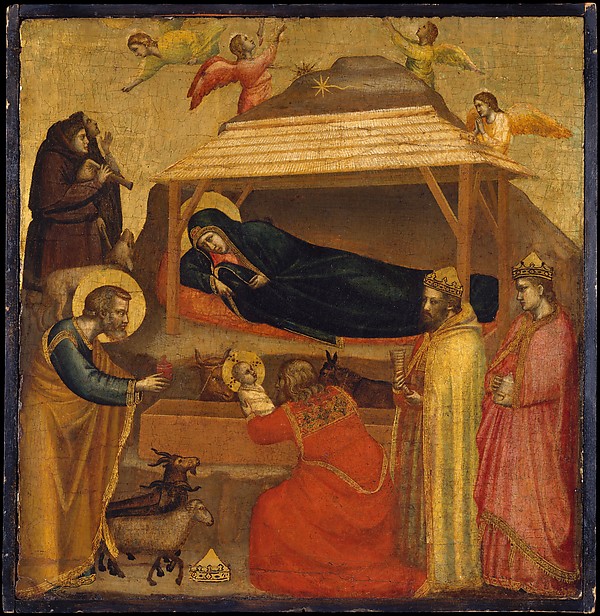 Fine enamelware made in workshops in Cologne in the 1300’s.

Diptych with Scenes of the Annunciation, Nativity, Crucifixion, and Resurrection

Date: 1300–1325
Geography: Made in Cologne, Germany
Culture: German
Medium: Silver gilt with translucent and opaque enamels
Dimensions: Overall (opened): 2 3/8 x 3 3/8 x 5/16 in. (6.1 x 8.6 x 0.8 cm) Overall (Closed): 2 3/8 x 1 3/4 x 1/2 in. (6.1 x 4.5 x 1.2 cm)
Classification: Enamels-Translucent
Credit Line: Gift of Ruth Blumka, 1980
“An outstanding example of Gothic goldsmiths’ work and enameling, this small devotional diptych achieves a gemlike quality through its accomplished technique and graceful style. The outer scenes of the Crucifixion and the Resurrection are executed in translucent enamel with details in opaque enamel, while the inner scenes of the Annunciation and the Nativity are in the form of cast reliefs. The diptych generally has been attributed to either a Parisian or a Cologne workshop. The unusual inclusion of a midwife in the Nativity scene is an iconographic peculiarity that appears for the most part to have been of Austrian origin. The essential stylistic qualities of the work link it with Cologne.”