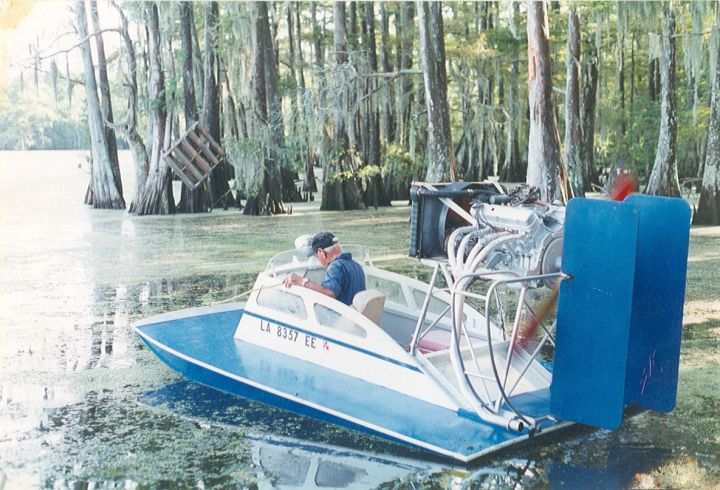 This is a photo of my grandfather, Sully Berard, Sr. in his favorite prototype airboat.  I’m not sure when this was taken, but he started building these boats in the 1940’s as far as I know at this point. No one had ever made one that actually worked before this one.  It was an essential tool for early oil exploration and drilling in the marshes along the coast of South Louisiana.  I sat down and asked my grandfather about the making of this boat, both of us on rocking chairs on the front porch of the house he built in the 1940’s.

He started out by learning to repair and balance broken airplane propellers from a nearby crop dusting service run by a man named Wallet.  There was a shed full of them.  He would splice the blade back on and then balance out the added weight with the other blades so that even with splicing, glue and nails on the repaired blades, the weight would be equal to the blades that had no splicing.  This is precision work.

What no one else had done was add steering flaps and raise the driver’s seat to the level of propeller structure.  The bottom of the boat had to be completely flat to be able to go through marshes and over cypress stumps that were invisible beneath the lily pads or brown water of the swamps and marshes. The front of the boat was square and lifted up above the marsh grass.

What you see in this photo is not only functional and efficient, but also easy on the eye.  Sully Sr. was called ‘the Master’ by his students.  His first rule was to begin your project with a clean table.  Clear off your work space.

I have a photograph of him and my grandmother in front of his house when he served as mayor of Loreauville.  My grandmother had a mink stole over her shoulders.  She loved that thing, and it was actually very elegant, so reminiscent of nicer times when beauty mattered, and when it was a classic beauty that mattered. I remember my grandmother’s living room on New Years Day, our family gathering day once a year, and how witty and entertaining the people there were.  I realize now that this was unique.  I realize now that most people spend their conversation time arguing over petty nonsense or gossiping or some other unpleasantry.  Truly funny conversation went out with the “Rat Pack”, an ironic name for the last gentlemen ever to control American media.  That was Frank Sinatra and Dean Martin and their crew and they did a wonderful job of it.  My grandmother’s mink stole reminds me of all this.

The 1954 Oscars Show is a study in the absolute and total complete reversal of American culture from elegance and intelligence to ugliness and vulgarity within a 50 year period.  The contrast is striking and shocking. How many institutions created by the last generation have been smashed by the enemies that dwell among us.  How many cultural norms of white America are now declared illegal?  To what extent is American culture now completely and totally Black Culture?  Is it 100%?   90%? We are being demolished by our own neighbors and government, there is nothing left of what existed when my grandmother wore a mink stole 50 years ago.

Education and media exist to convince white people to hate themselves.

I can’t go to a Mardi Gras parade anymore because every single float is blaring vulgar and insulting Black Gangster Rap music.  Every single float. 100% of them.  The dancing girls are doing African dance moves, and there’s no classic beauty in that.  It’s just vulgar to see young girls using the dance moves of a combination pole dancer  and African tribal warrior.  One will steal their future husbands, the other will rape and slaughter these young girls if given the opportunity.  American culture is now a celebration of the cultures of our worst enemies, and now the Muslims make even more demands.

America is literally no longer a nation. It’s open territory, and the whites here have no army that we can see. There’s an army, but they do not fight for white. They fight for whoever the president tells them to fight for and if the president is black then they must fight for blacks.  That leaves whites with no protection.  While the U.S. military is training Iraqis in various very important job skills, giving them full capability of attacking the USA, the rape and murder rate in America, in terms of black on white crime amounts to a war, when looked at in terms of number of lives lost.

There simply does not exist any military or judicial institution, no educational or job training institution that functions for white people. White people are the only race that makes laws preventing ourselves from establishing institutions for our own self-help.  Yet, we pour money into the coffers of our worst enemies, every day, millions and millions of dollars so that our worst enemies get free education, job training and business subsidies and this has been going on for generations.  On an official level, the war on white has already begun, and the first thing our enemies always do is infiltrate our very infiltrate-able government.  It’s just so easy to do, as long as you do away with honesty and local trained militia and local everything.

My grandfather Sully Sr. studied Industrial Arts and my grandmother, Anita [ne’ Boudreaux-Thibodeaux] studied business skills at what is now the University of Louisiana at Lafayette.  For years, Sully Berard taught industrial arts at New Iberia High School, Anita, or  Mrs. Sully, as she was called, taught Catechism.  My great Aunt Doris Bentley was the principal there at one time.  Yes, local people ran local schools in those days and owned essential local businesses.

When off shore oil exploration began, Sully Berard’s older brothers leased boats from him, through their involvement in the Texaco Company.  The Texaco offices were on Jane Street in New Iberia for many years in those first days of offshore oil exploration at Lake Dauterive.  This Berard family had been in banking since forever, and Sully was the second youngest son of a twelve member family.  His oldest brothers had established a bank in New Iberia and were in a position to support Sully’s business at the beginning. Their mother was a Dejean from Opelousas, another interesting family, historically speaking, whose brick plantation home still stands behind the cooling towers of the hospital there, but I digress.

Sully would design and build whatever type of specialty boat Texaco needed. His first  shipyard at the Port of Iberia was with Joe Waguespack.  Later my own father, Ed Broussard, veered into the boat business after marrying Sully’s  daughter Brenda. Between the entire family was built and rented tugboats, crewboats, barges, spud barges, quarter boats and boats designed for seismic exploration, all for oil production and exploration.  My uncle Burns Berard became an excellent salesman and the business was successful. That’s when the mink stole appeared, and I remember my grandmother’s joy over that.

Sully called the first shipyard “Joe’s Shipyard”.  Later, with his sons as partners, the business was called Berard Boats.  Now it’s called Diamond B Marine, but it’s all gone from family hands.  There was that attack by the IRS that really killed the business. My uncle Burns died young.  My grandfather retired in his 60’s and spent the rest of his life in various projects at home which I had the great fortune to observe.  Besides having a complete machine shop at home, where he built whatever boat he needed, he at one time decided to raise fighting roosters.  Wow.  First he paid around $25,000 for the best breeding hens. Then he fed them ground meat, eggs and vitamins.  He built nice cages for them and he practiced them by tying a leather harness around one leg, with a string so he could pull them back when the fighting got too fierce.  Those were the most pampered animals I’ve ever seen.  The fights were held in a room behind the Brown Derby bar in Loreauville, which still exists under the name Top Hat last I heard. I actually went in there once when I was little, so I know, but I wasn’t supposed to be there.

What I learned about rooster fighting is that it’s the only way to make small scale egg production profitable enough to bother with it.  The campaign to shut down Rooster fights was actually a campaign to kill local egg production and to eliminate yet another possible source of income for the People. My grandmother produced enough eggs and tomatoes for the entire town, trading them for other people’s surplus.

If an Alien Being from another dimension appeared in America today, they would have no doubt that government exists to make people homeless and unemployed, and that it does a very good job of it.

As for the Airboat, Wikipedia will claim that, like everything else, Thomas Edison invented it.  This is a bald faced lie.  When Sully had perfected his Airboat, some patent lawyers came snooping around to see what they could steal.  The fact is that, other people had attempted to build an Airboat, but failed.  A patent on a failed experiment is all anyone ever had, if one existed at all.  What Sully Berard had was a successful prototype that was already in production and being leased to a major company, and it never occurred to him to patent it. For that reason alone, he has hopefully earned his way into heaven.

The tiny town of Loreauville now has at least five very successful and innovative boat building enterprises. The first aluminum boats were built by Sully Berard who taught the skill to a man named Roy Breaux, Sr. who then obtained government contracts to build aluminum boats for the U.S. Navy, and this business grew by leaps and bounds.  My grandfather told me how he dealt with the thieving lawyers: “I just spoke French and acted like I didn’t understand English and they went away.”

Frank Sinatra’s FBI files contain a few newspaper clippings which name exactly who was opposed to the making of the Manchurian Candidate.

One thought on “Airboat”