Skip to content
Y-Net Press Headline:
Jews Declare Open War on Sweden…
War waged through immigration, degradation, taxation:  this announcement is a rare bit of truth that escaped Jewish news editors, a truth that is causing a  collapse of support for Israel due to exposure of the Jew’s devious plans.

Those of us who seek to tell our people that they are under assault suffer the worst kind of oppression.  Jewish oppression reaches within our very families, and this secret branch of invaders that control the CIA has made our lives unbearable to the point that no one but blacks and Muslims will be having babies if this continues. Absolutely every area of our personal lives are degraded by the efforts of Jewish supremacists and their spy network that operates with impunity from Hollywood, through immigration, degenerate cultural programs or through the banks.

Their spies even marry into our families, the better to control us and kill us off one by one so that no one notices or cares.
It is not just a Jewish agency or two, like Paideia or H.I.A.S promoting and assisting massive numbers of non-whites to invade Northern European and other White countries.    The Israeli Interior ministry stated that it has exported countless non-white immigrants to Sweden, directly, paying each immigrant 3,500 dollars each to leave Israel and stay in Nordic Sweden.The immigrants were put on flights to Sweden en-masse.  This has been likely occurring for decades, although it has only recently been exposed via a propaganda failure on behalf of Haaretz, which let the story slip.
Importing non-white immigrants into European nations allows them to be used as voting blocks, cultural revolution shock-troops and genetic weapons of mass degradation against all majority European nations.  Rhodesia and South Africa have already been destroyed by black immigration.
A Jewish Israeli Interior ministry spokesman said that”in 2013, 2,612 migrants from Africa left Israel as part of this voluntary departure process. Of those, 1,955 were from Eritrea and Sudan.”Most of these non-white immigrants will have genetic IQs ranging in the low 60-80 range, with a high predisposition to have larger families of 5-7 children, in addition to often resorting to criminal activity, such as smuggling of drugs or prostitution in addition to living on welfare.
Rabbi Schwartz is the man on the far right, standing just behind what looks like a mannequin of Jackie.

Rabbi Schwartz, there behind the Jackie, caught my attention because he looks exactly like the man surnamed Quinn who owns the haunted house on the side of Maunaloa Volcano.  I call it haunted because it’s where children’s clothes appear out of nowhere, along with other violations of the laws of physics that could cause death or injury.
In the same haunted house I also found large styrofoam mailing boxes, the kind that would be used to ship recently harvested organs and fresh blood.  My father used to ship frozen quarts of home-made crawfish ettoufee to friends all over the world in those styrofoam shippers.  Those were the good old days.  So much has changed.   In the haunted house, which is owned by a man named Ric who lives in Florida, there were over a hundred satanic themed Hollywood films on DVD, plus other satanic paraphernalia.
Today the house is occupied by another Rabbi Schwartz look-alike who says he doesn’t have any Rabbis in his family: 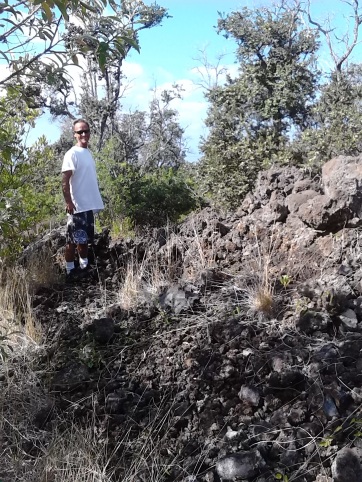 This is the man who  lives in the haunted house of Maunaloa, rent free.  You can’t tell much by this photo, but the resemblance to Rabbi Schwartz is striking.  Besides this man who goes by the last name Quinn, there’s another look-alike at minute 1:19 for an ad for men’s clothing line “Duncan Quinn”.  The ad features a dead girl with a noose around her neck stretched out in her underwear on the hood of a car.  You can see it on this video which deals with the degradation of women in our society, to the point that abuse of women is used to sell men’s clothing.
A  foot path through the rear yard of the haunted house leads in several directions.  In one direction, it leads to an abandoned house which the inside looks like this:

This building is an examplel of the types of places where illegal drugs are cooked up and where children would be brought and injected with sedatives before being sent up the mountain.

Inside of the Gator Aid bottle on that table are what look likes syringes. These two images are of an “officially condemned” house in Ocean View, Kau District, Hawaii Big Island. Condemning of properties in this subdivision is unheard of, so this provides some clue as to who is behind the traficking of young children, and in fact all the locals know this.  It is official involvement in child trafficking that makes it impossible to report or combat.
This building is an example of the places where illegal drugs are cooked up and where children would be brought and injected with sedatives before being sent up the mountain as sacrificial victims.
In the photo of Rabbi Schwartz at Scarsdale, he is standing next to a cake in the same shape of a book, same as that made for Larry Nicholls by his mother for the DeMolay ritual a generation later.    This photo is from the Scarsdale High School Yearbook of 1957.
The real life consequences of the Rockefeller Agenda is reported in English News. org.The crime epidemic caused by non-white immigrants in Sweden is culturally and economically crippling, the non-white immigrants Israel is exporting are especially degrading, the leading role Jewish supremacists are conducting in the destruction of our nations and our children and families could not be more obvious.
In only the first seven months of 2013, over 1,000 Swedish women were reported as having been raped by non-white  immigrants, primarily Muslims in the capital city of Stockholm alone, the figure is colossal over Sweden as a whole.

Over 300 of those 10% of rapes reported in Stockholm were of girls under the age of 15.  The government does nothing and it is up to the girls to resist themselves.

These numbers of rape caused by non-white immigrants, Somalians primarily, and other Africans and Asians, are only the tip of the iceberg.According to the authorities, Sweden’s real rape statistics are 400-900% higher than official numbers.

The B.R.Å website states:“As few as 10-20 percent of all sexual offenses are reported to the police.”Israel has been giving 3,500 dollars equivalent for each immigrant to leave Israel and go to Sweden for several years.

These non-white immigrants cost every nation where they arrive,and in fact this is actually part of the Jewish strategy, since Jews control every aspect of spending of tax dollars.  Immigrants from every Muslim nation are paid to leave and enter all of the white traditionally Christian nations.  All of the immigrants have debit cards that are refilled regularly, their own personal IPhones and Apple computers to use in the refugee centers.   They certainly have lots of free stuff from Karl Rosenberg/ Steve Jobs….hmmm, is that why no one wants to arrest him?  He has his own army right here in the USA!

They will stop being his army just as soon as he stops paying them.

Bill Still reported a year ago that 30 busloads of illegals at a time were debarking from planes chartered by UPS.  This is what Trump is actually dealing with, while our enemies in the media defend the Rosenberg Army of Immigrant Muslim Soldiers of Allah.

English News dot org reports:”The Jewish state should, according to the massive non-white immigration rates and degradation of European nations, be financially, morally and militarily indebted for eternity for its demographic crimes against Europeans.   While taking payments of aid from our government, they keep their state borders immigrant-proof.    Jews demand DNA tests for long-term immigrants who go to Israel seeking to be residents to prove they are Jews.   The European Commission, the European Jewish Congress and the Jewish UN migration chief openly declared its aim to “undermine the homogeneity of Europe”.    Jewish-inspired policy goes further, with the promotion of Orwellian punishments and brainwashing for youths who display signs of ‘intolerance’, in accordance with the legislation being pushed right now through the EU by Moshe Kantor, the EJP and the European Jewish Congress.

Paideia , a Jewish lobby group promotes anti-Swedish propaganda and mass-immigration  of African negroes for the extermination of white people.   They openly advocate genocide by not calling it genocide.  Their goal is to repeat what was done to old Berat before it became  India:   reduce white caucasian states to mediocre multi-ethnic states engulfed in civil disturbances and war, even to the point of creating high crime-rate multi-ethnic states.

Multiculturalism is genocide.  Open borders are propaganda cover, to promote and work towards exterminating Europeans and Americans.  Every time a Jewish activist uses terms such as multi-culturalism, tolerance, integration, pluralistic society, one can be 100% sure that all they mean is: whatever it takes to destroy Europe and America.

To further put the story into perspective: Jewish groups advised the Greek government to arrest Golden Dawn, as has been documented, for standing up for the racial interests of Europeans, which has subsequently occurred.  The Golden Dawn leaders are still in jail today, whilst the Netanyahu and his Israeli state pursue its own racial agenda.

“I think there’s a resurgence of anti-Semitism because at this point in time Europe has not yet learned how to be multicultural, and I think we’re going be part of the throes of that transformation, which must take place…

“Europe is not going to be the monolithic societies [sic] that they once were in the last century. Jews are going to be at the center of that. It’s a huge transformation for Europe to make.They are now going into a multicultural mode, and Jews will be resented because of our leading role.”Barbara Spectre, Jewish head of the Jewish propaganda organisation: Paideia

There is no hypocrisy in the Jewish mind.  They are certain that their agenda is the most moral one, and they feel free to lie, cheat and steal in the achievement of that agenda.  The death of Catholics is pleasing to their God, and the sacrifice of Catholic children is their ideal sacrifice.  This is their highest and most fanatically driven objective, the way to win the approval of their satanic deity.

I recently heard sirens and automatic gunfire from up the mountain.  It happened the day or two after I published an article about child sacrifices at the top of Maunaloa Volcano.  We saw police vehicles driving up the hill all day long, from all directions.  That was about three weeks ago, but then about a week ago we felt a sharp earth quake, as if something had exploded and fallen in.  That is all I can say about the events other than that Ocean View did finally get a bit of rain after these events.  Remember Elijah would not pray for rain on Mount Carmel until after the sacrifice of children had ceased.  And I did hear a report that a whole new set of FBI and local police had arrived shortly before Trump’s inauguration.  So let us keep up the prayers.

This assault on our nations must be publicized, opposed, annihilated and then reversed,  the general public need to know this, they are the majority of our folk, and the future like it or not relies on their enlightenment to their own situation, thankfully public opinion is growing against the Jewish state and Jewish promoted and enacted mass-immigration at colossal rates.

One thought on “Jewish Wars”