Anyone can can get online and find lots of photos of outlaws and gangsters.  Here are photos from my collection that can be compared to those online photos from which a pattern emerges telling the truth about our stolen history.

Start with the photos of criminals below found in the Hawaiian textbook, previously referenced, written by Dr. Sai.  I call them criminals because the takeover of Hawaii, like the takeover of America, was an openly criminal act that has never faced justice.  With each unpunished crime, this gang has gained power.

The names are a clue to relationships between Wild West outlaws, US presidents, the Dudney family  and the people who pulled the Hawaii scam.  You can throw in the British royal family and probably some French leaders also.

The names Disney in America and Dudley in Britain both derive from the name Dudney which derives from the name Dieudonne.  The two letters EU are the Hawaiian/Greek word for snake or ground crawling serpent.  It’s pronounced like Jew.

So Dieudonne actually means ‘Jew given’ or ‘from the serpent’ in coded language.

For me, the study of these faces is a bit overwhelming.  I’m also studying the good guys who actually created the silent films, and who invented the technology for offshore oil drilling, along with the bad guys who stole the films, royalties and the identities.

I’ll just publish photos with short notes for now.  The same bad guys and their  families also turned themselves into reconstruction politicians in Louisiana so I’ll publish some photos from all these sources so that anyone who is interested can start doing their own facial comparisons.

When you use Wikipedia, go to the end of the entry and follow the articles that are suggested as related.  A pattern will emerge.

Gender switching and black face are found wherever bad guys are found.  Remember that the judges, marshals, politicians, presidents, British “royals”, thieves and murderers all switch places and are the same group of people.

The only people you won’t find in your searches are the good guys.  For example, if you look for images of Douglas Fairbanks, you’ll only get images of another actor who appears with him in the silent movies, but you won’t find his picture unless you actually watch the movies.

The film Robin Hood is super important for finding code words such as Robert Earl of Huntington, which is the name of Robin Hood/Douglas Fairbanks in the silent movie, which is amazing to watch.  The actor Douglas Fairbanks looks exactly like my deceased brother Clay.   Fairbanks is probably my grandfather, Albert ‘Pep’ Broussard.  Maid Marion looks familiar also, but I’ll save that for another article.  For now we’ll focus on the criminal gang.

From the Dudney family book, you’ll see the resemblance between the Hawaii gang and even some present day creeps like Joe Biden, Brigitte Macron, Cathy the sister of Mike Flynn and even Adam Schiff.  You’ll find Sanford Dole and the ancestors of the people who live in Youngsville,  Louisiana who call themselves Broussard and who are related to the Perrins.  Like I warned, it’s a bit overwhelming. 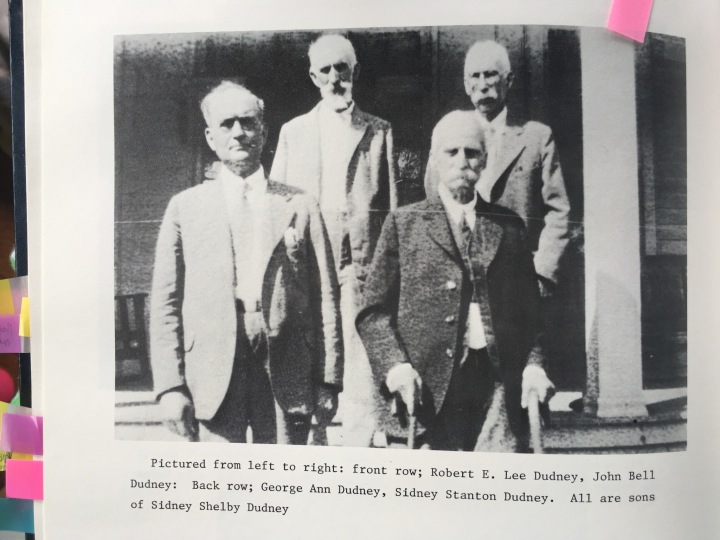 Next are images from a propaganda rag published by a Lafayette Louisiana newspaper.  Jim Bradshaw is the “historian” responsible for propagation of lies about Louisiana history.  Hardly anything in this tabloid is true, but the place is where the Caffery/Mouton family is located now.  The homes of everyone else have been burned.  I myself am an exile, but can’t escape from this bunch now that they have gotten control of our Federal government CIA and FBI.  I suspect that Trump continues to pay their salaries so that they can be rounded up more easily.

Meanwhile, here’s the Mac Clure family from the Dudney book.  Control of the post office allows them to read everyone’s mail.  The name Mac derives from this family who also sold Irish girls into slavery.  The name Mac as a coded name refers to slavery and spying.