My choice for most likely father-daughter in real life is shown in the photo below.  If true, and if   “Trish” Erlinger/Theresa May did have a child with Larry Nichols, then the grandfather of French President Macron is King Salman of Saudi Arabia.

His other son, Muhammad/Benalla would be Macron’s brother, probably half brother.  This is my educated guess, based in part on genetic markers.  The eyelids especially are unique and match perfectly between father and daughter.

An intriguing aspect of this situation, if I’m correct, is that Trisha’s father, as she told me, was an Army General.  I assumed she meant U.S. Army.

It’s quite possible that this man, King Salmon, has another identity as a U.S. Army General.

It also appears that Trish played the role of Julie Gillard of Australia. 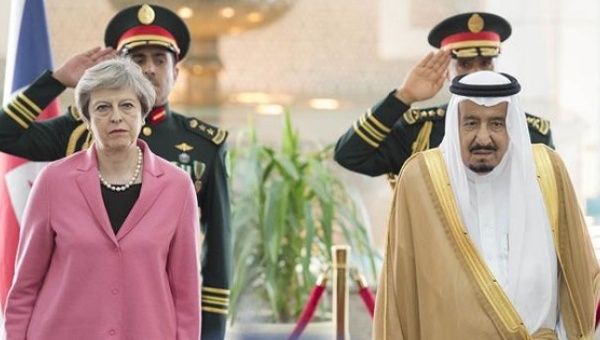 My pick as most likely real identity of Diane Feinstein is linked below.  It’s an obituary but these people fake their deaths all the time.  She is a sister of Sonny Mouton, making her closely related to Sarah Netanyahu, who I’m seeing as Sonny Mouton’s daughter or other close relative.

The Mouton family is connected to the Payseur/Pager families from their hoaxes during the days of the French and American Revolutions.  I’m talking about the fraudulent Louisiana Purchase.  Josephine Bonaparte was not her real name.  She was known as Rose Pageur/Pager.  According to Barras, she was definitely working for the English.

There are many indications that the name Mouton is the same as LaMotte, of the famous “Affair of the Necklace.  This is described in Paul Barrras’ Memoirs, in which an actress was made up to look like Queen Marie Antoinette in order to scam money from someone who was in love with her.  Link to Dianne Mouton Landry:

I will add that Dianne Landry’s son married a Japanese girl who divorced him immediately after entering the United States and went to work for the U.S. Department of State  with her degree in computer science.

My pick as most likely close relative of Harvey Weinstein, I’ve posted previously, is former Governor Mike Foster of Louisiana.

My guess as to how they fit into the crime family is through Al Capone/Roy Breaux’s brother whose name is/was Hugh Breaux, also from Loreauville.  I have to congratulate anyone who is still following this genealogy.

If you’re new to this site, please go to the beginning.  I’ve recorded my discovery process for a few years now, carefully laying down the evidence.