I’m taking a closer look at the family tree that was put together by some relative of mine who uses the first name ‘David’.  No one in my family has ever had the name David. This name belongs to the Jewish Gangster tribe of David, according to my friend Jack Fine/Jacob Schapiro of Algiers, Louisiana.  He explained to me how, as a kid, he and his buddies used to push over the vegetable carts of street vendors and run off with the inventory. This was in Brooklyn, New York according to Jack.  Jack Fine is well into his eighties and mostly on his deathbed last I heard from mutual friends.

So there’s a huge difference between my culture and the culture of this Tribe of David who are now a bunch of unknown cousins of mine. They’re unknown to me because I’m the last of the non-Jewish bloodline of the Jean Edmond Broussard family, that I know of, therefore I have not been included in family gatherings.

My actual experience with these crypto relatives is that they’ve been laughing at me for the isolated, powerless prisoner that they consider me to be.  Like Trump, who’s in the same situation, they surround me with mockery and criticize me for minor mistakes, to distract attention away from their major crimes.

It was my grandfather’s brothers who all married into a family of Jewish Fake Catholics, except for two women. One was Laura who died in childbirth in 1919 and left her husband, Octave Prince with several children.  These children were raised by relatives. The other sister, my Aunt Camille, didn’t marry.  She was the one who told me that the genealogy being foisted upon us was fake. She did a lot of courthouse research and even wrote to French clerks of court.  I have her file of letters telling her that no record of a Broussard family exists in old France except for a few relatively recent immigrants.

My branch married real Catholics with no Jewish blood.  Therefore I am very much outnumbered, and what family I did have before all died very young  [coincidence?] I didn’t know who these other relatives were until now that I’m studying the genealogy that they have put together.

Seeing that my crypto cousin Trudy is the same person as Ghislaine Maxwell has been a motivator for me.  Her father is said to be Robert Maxwell, a hugely busy and suspicious character who worked for British Intelligence in WWII. I was told that Trudy and Joan’s father is Antoine Preval Broussard, my grandfather’s brother. Are these two different people or are they the same?

Could he be the same ‘Antoine’ that Tom Clancy wrote about in his nonfiction history of Special Operations, “Shadow Warriors”? That Antoine, according to General Carl Steiner, was deceptively giving the advantage to Communist forces in France. He was the head of the notorious secret ‘third rail’ which eventually won World War II.  He funneled American arms to his Socialist troops, leaving French troops without.  His Socialist army sabotaged the efforts of the French.  According to Steiner’s account, the atrocities committed against French and German civilians was actually the work of Chinese Hun mercenaries wearing German uniforms.

Maxwell has an FBI file from 1957-58 revealing him as instrumental in establishing the Nuke Hoax in America, using a front as a British publisher.

All of the scientists connected with Early Nuke Bullshit were Jewish. Very telling that the alias names of Maxwell are redacted in the published files. This tells us that the FBI and British Intelligence are one and the same.  Otherwise, why hide this?

Maxwell spoke eight languages and travelled the world, often going to Russia whose language he spoke.

What I will do now is study the many unusual names in this Broussard family tree, the descendants of Jean Edmond Broussard of Loreauville, Louisiana.  I’ll pick out the most recognizable names first.

The names Noble, Buisman and Pie caught my eye. Noble because of the oil drilling company called Noble.

The surname ‘Pie’ calls to mind the French family Payseur which Q mentioned and which is also the surname of Rose Tasher, known as ‘Josephine Bonaparte’.

Buisman is basically the same as Bushman which is one of the names used by Myrna, the mother of Hillary and Bill, also wife of Chet. Could be the source of the name ‘Bush’.

This name Buisman traces back to a place in the Netherlands. I’ve been curious about that area ever since I realized that most of the people in America before it became USA, had more communication with people on the Russian side than the British side.  Americans are not aware of this, generally.  Included in what I call the “Russian” side are the Netherlands, Sweden and Denmark, along the North coastal regions of Europe as well as Eastern European countries, all places whose borders and names have changed dramatically in the past two centuries.

The explanation of how these countries were subjugated by Jewish bankers is found in the hypocrisy of the French Revolutionists.  Paul Barras’ memoirs detail the way the revolutionary leadership snatched up the land and businesses of the people who they exiled or imprisoned for the newly declared crime of being part of the Catholic Nobility.  Thus the Revolutionary Insiders were able to claim that the land had been ‘forfeited’, take up their titles illegitimately and claim to be part of the bloodline of the same Catholics from whom their titles were stolen.  This is how a bunch of dirty crooks claim to be members of an ancient family of legitimate land title holders.

The French Revolutionary insiders named  Hoche and Borel were among those who were guilty of this, as well as all of Napoleon’s relatives. At least one of these relatives landed in St. Martinville, Louisiana.  Here is a photo of the home and business built by Lucien Bienvenue which I have gathered is a member of the Bonaparte family, Lucien Bonaparte in particular.  This property is now in the possession of the Willis family. I was there with Edward Willis, son of former Mayor Mac Willis, about four years ago, looking for his son who lived there at the time.

As I was searching for relevant photos, I came across this article which includes the name and reference to Father Gerard LaRoche.  I mistakenly called him Vincent and misspelled his last name in previous posts.  I was four years old when the new LaSallette hospital was dedicated. The man named Dr. Schneider is the one who delivered me in the original Loreauville hospital, according to my birth certificate and as I was told by my mother.

Another photo that I came across is this previously published, below, which I realize now must be the Carlos Slim Helou family.  The first one in front is the one claiming to be an illegitimate son of Frank Sinatra.  I think he looks like El Chapo Guzman.  His brother in the middle looks to me like Joseph Mifsud/Mahfouz. Their father in the photo below corresponds to Carlos Slim himself.  This photo is fairly old:

This midget is included in my narrative mainly because he’s a midget.  He’s also connected to the Hessian soldiers who were sent to America as if they were British soldiers during the Fake American Revolution.  I remember learning that these soldiers had been deprived of their ancestral lands by the newly established midgets, so they accepted the free transportation to America, the nice red coats and the free guns and went to America. Once arrived, they turned the coats inside out and disappeared.

The next search result is the earliest ancestor to the Buisman that I can find.  They lived in Smalle Ee, Netherlands:

Smalle Ee is where they actually trace to, the location of an ancient Catholic Convent.  It was also the location of a shipbuilding industry connected to the northern sea by man made canals.

This is a paper handwritten by my mother that shows my own immediate family: 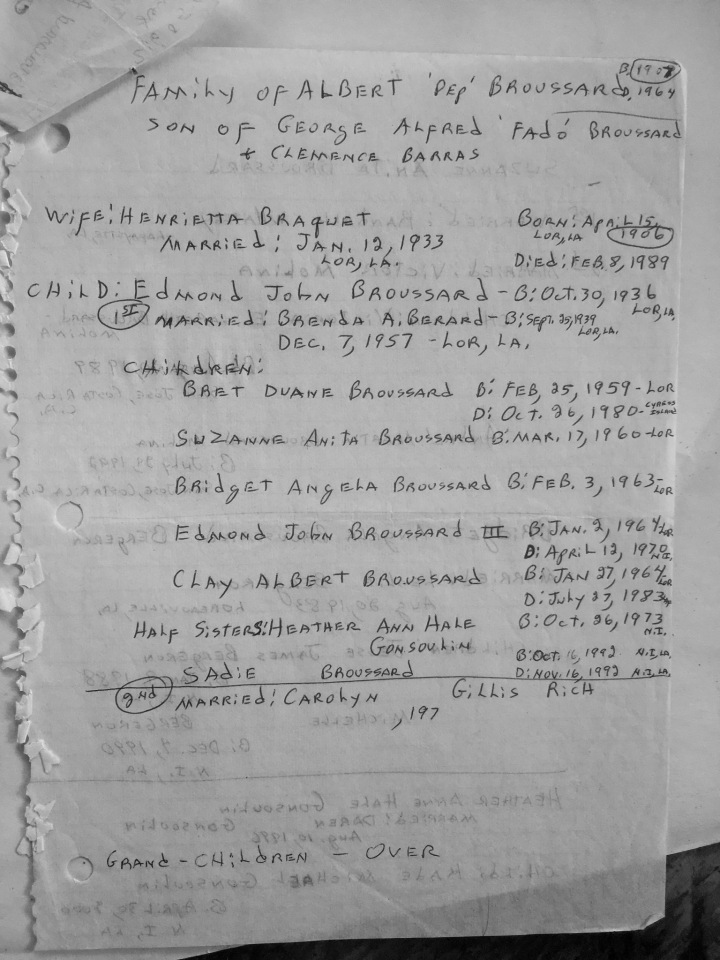 Next post I will show where the actor John Wayne is actually Curtis Broussard and  is related to me and to Ghislaine Maxwell/Trudy Broussard.  This information is for those who already understand the situation. I can’t provide solid proof of these claims yet, I can only consult my own memory of these people.  Proofs will hopefully appear when FBI and CIA files are made available without redactions.

This is a good time to call attention to the problem of censorship of Beatles songs.  Following these lyrics is the one and only video that I could find of the song Maxwells Silver Hammer.  Those Macs need a good smack.