This is a film of El Chapo’s reaction from 2017 after his arrest, or that’s what is reported anyway.  I’ve never seen this before, even after extensive research on him.  This is a link to recent  tweet:

Long ago I told a story about a woman who abused her servants in New Orleans during the 1800’s.  One of the chained victims started a fire rather than continue, and the result was that dead bodies and more starving victims were found in the elegant mansion.

This wealthy woman was literally chased out of town by her French Quarter neighbors. She escaped on her schooner that was moored at Bayou St. John and went to France.  The surname of that woman was exactly the same as El Chapo:  Loera. Loera like the name of a Villa involved in the strange hijacking of the Scientology dude, L. Ron Hubbard.  Also sounds like Loreauville. The name Lowry is on the Broussard family tree of fakers. They own a printing company in Lafayette.

The Gambino family owns a bakery there also.

Schumer’s problems are getting serious, but he’s worried about children brushing teeth according to this typical Mob tweet:
Chuck Schumer
@SenSchumer
·
1h
This is not acceptable. A child telling us he’s not able to even brush his teeth in a facility on our southern border.

This is not who we are.”

Federal Election Commission records show that Schumer received seven $1,000 donations from Epstein between 1992 and 1997, first as a US congressman from New York and then when he was vying to be the state’s senator in 1998, an election he won. 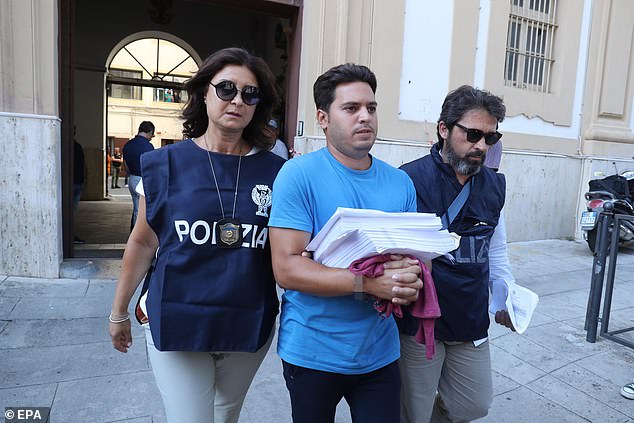 “How much can he do to me? What can they do? … Two hits of a mallet,” Militello allegedly said.  Militello is shown in the photo above, with handcuffs kindly blurred out by the publisher.

Militello’s Dec. 6 conversation with reputed fellow gangster Francesco Inzerillo came a day after Palazzolo showed up at Inzerillo’s store with a video camera and began questioning him, La Repubblica said.”

My father’s accountant, and family of a classmate at Mt. Carmel:

Other New Iberia names mentioned include Lapresto, a family who married into the Toca family.  Cardenas, cousins of the Tocas, Cuban immigrants supposedly fleeing the communist Castro regime, but actually part of it.  The Lopresto patriarch had offices at the old Heyman store on Main Street.

Oscar Alvarez is mentioned, same name as a fat psychiatrist in New Iberia who had a large family. Also an immigrant, from Puerto Rico in the sixties.  Yet he immediately had a high position at the New Orleans Museum of Art.  The art museum is traditionally a smuggling opportunity. His daughter went to work at the Capitol in Washington DC reading the voting rolls. Catholic High and Mt. Carmel yearbooks have all these people. In Lafayette they go to Our Lady of Fatima mostly.

Guerrero, a name mentioned below also linked to identity theft and fraud concerning the Doerr estate in Lafayette.

From the Department of the Treasury about top members of Maduro’s Intelligence Community, the DGCIM, being put on a sanctions list.  The Sanctions List is actually a searchable data base linked to the Department of US Treasury’s website.

The reason for targeting these four Maduro men was due to their connection to the arrest, torture and murder of Venezuelan Navy Captain Rafael Acosta.  It makes sense that Navies of many governments around the world would help to seek justice for this man, and other prisoners who might still be alive there.

Of the four men targeted for sanctions, the names include Guerrero, a name in my Fake Broussard family book, posted previously.  Blanco is a name from Scarsdale, the former Louisiana Governor Kathleen Blanco, maiden name Babineaux, also posted previously.

PRESS RELEASES
Treasury Sanctions Officials of Venezuela’s Military Counterintelligence Agency
July 19, 2019
Washington – Today, the U.S. Department of the Treasury’s Office of Foreign Assets Control (OFAC) designated four officials of the General Directorate of Military Counterintelligence (DGCIM). The DGCIM, including these officials, has been accused of systemic human rights abuses and repressing dissent and was sanctioned on July 11, 2019 pursuant to Executive Order (E.O.) 13850, as amended. This action follows the arrest, physical abuse, and death of Venezuelan Navy Captain Rafael Acosta Arévalo.

The four DGCIM officials targeted include:

“The United States will continue to hold individuals accountable who are involved in the former Maduro regime’s use of intimidation and repression to target and silence political opponents, innocent civilians, and members of the military,” said Treasury Secretary Steven Mnuchin.

“The United States will use all of its authorities to target those who have helped the illegitimate Maduro regime repress dissent, free speech, and the will of the Venezuelan people.”

This is a simple equation, corollary to this one:

The blatant lies about America and our President cannot be fact checked by people who cannot read.  The lies about us are typical communist agitation. Dangerous nonetheless.

The incidents at the Strait of Hormuz appear to be false flag operations.  The British controlled Iranian military is taking control of their own British ships trying to start a war between two countries that the same people control. This is all they know how to do.

In this next tweet, you’ll see the target group, Americans, as defined by the enemy.  Notice the word straight.  This tweet is telling followers to target white straight men:

“Trump is… the kind of racist who…And if you think you’re safe because you’re not a woman of color, you’re wrong. By the end, if you’re not a straight rich white male, he’ll come after you too.”

I’ve been blocking every hysterical, war mongering tweet that I come across.  If enough people do this, rather than reply, the result could possibly be effective due to massive effort.  Unfortunately, if you reply to a lying tweet you increase the reach and coverage of these lies.  So sometimes it’s better to not reply by retweeting, just use quotations and pass on the information for researchers if it’s important.

If the word ‘racist’ is in the tweet, I block it.