The Nanotechnology Rabbit Hole would be of interest to targeted individuals and corona virus researchers.  The video below, at the very beginning, is not easy to watch. It’s said to be a corona virus victim, not sure, but I’ve seen a couple of examples of a similar collapse in Wuhan.

While researching disease diagnostics  I stumbled upon the information I needed to explain how directed energy works to debilitate and kill target victims.  The research is being conducted under the umbrella of medical imaging (CT scans, MRI) cancer research, jet fuel research, vaccines, mechanics and electronic equipment research.  This is why it’s been so difficult to find.

There might be a connection to the corona virus here.

This collection of quotes contains many  keywords for digging deeper into the research.

To dip our toes into the subject, we start with Ferrofluids at Wikipedia. Ferrofluids are nanoparticles of iron suspended in a carrier fluid. This fluid would obviously respond to magnetic energy. This is how it begins.

What you will not be told, is that the  human body is a ferrofluid or nanofluid container when it’s full of nanoparticles of iron, cobalt, aluminum, etc.

“Ferrofluids usually do not retain magnetization in the absence of an externally applied field and thus are often classified as “superparamagnets” rather than ferromagnets.[3]”

“In 2019, researchers at the University of Massachusetts and Beijing University of Chemical Technology succeeded in creating a permanently magnetic ferrofluid which retains its magnetism when the external magnetic field is removed. The researchers also found that the droplet’s magnetic properties were preserved even if the shape was physically changed or it was divided.

Nanoparticle size and shape affect the heat productivity. The balance between size and complexity of surface depends on what it’s used for.

“Ferrofluids are composed of very tiny nanoscale particles (diameter usually 10 nanometers or less) of magnetite, hematite or some other compound containing iron, and a liquid. This is small enough for thermal agitation to disperse them evenly within a carrier fluid, and for them to contribute to the overall magnetic response of the fluid. This is similar to the way that the ions in an aqueous paramagnetic salt solution (such as an aqueous solution of copper(II) sulfate or manganese(II) chloride) make the solution paramagnetic. The composition of a typical ferrofluid is about 5% magnetic solids, 10% surfactant and 85% carrier, by volume.[5]”

An image of what ferrofluids look like when magnetized:

A ferrofluid in a magnetic field showing normal-field instability caused by a neodymium magnet beneath the dish: 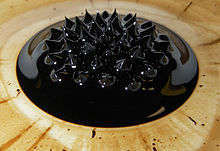 “Ferrofluids can be made to self-assemble nanometer-scale needle-like sharp tips under the influence of a magnetic field. When they reach a critical thinness, the needles begin emitting jets.

Ferrofluids have been proposed for magnetic drug [bio-weapon?] targeting. In this process the drugs [or bio-weapon virus] would be attached to or enclosed within a ferrofluid and could be targeted and selectively released using magnetic fields.[26]”

“The use of nanoparticles in vaccine formulations allows not only improved antigen stability and immunogenicity, but also targeted delivery and slow release. A number of nanoparticle vaccines varying in composition, size, shape, and surface properties have been approved for human use and the number of candidates is increasing.” From  Sciencedirect.com

Ferrofluids are fed intravenously for diagnostic imaging, and are installed in laptops and phones. It is also used for fabric coatings, and is also FDA approved for food additives without labeling. Could all of these particles and electro-magnetic forces possibly interact? Isn’t that precisely the point of the research?

Did you notice that the man in the video reacted negatively afterhe grabs his laptop and brings it closer to his body. Of course this is only one possible explanation for whatever is happening here.

“Ferrofluids have also been proposed for targeted magnetic hyperthermia to convert electromagnetic energy into heat.[27]”

Today, some 300 million sound-generating transducers per year are produced with ferrofluid inside, including speakers installed in laptops, cell phones, headphones and earbuds.[14]

This aspect begins to explain how a person can literally be cooked while standing, simply through the use of directed beams of light or magnetic energy. Certainly a neighbor could target someone next door…

But the human victim has to be a Ferrofluid container for it to work.

By one estimate, Americans have more than 70 million CT scans and 40 million MRI scans every year. That creates 110 million nanofluid containers that last about one month per scan, because the nanoparticles pass through the body in that time.

Energy harvesting from the environment stretches the idea of the human body as ferrofluid container, because the container must be wrapped with a coil for it to work.. Would flame retardant nanoparticles on treated fabric serve the purpose?  I wonder if the man in the video is a fireman wearing flame retardant uniform. Looks like it could be. There are many possibilities.
Ferrofluids enable an interesting opportunity to harvest vibration energy from the environment. Existing methods of harvesting low frequency (<100 Hz) vibrations require the use of solid resonant structures.

With ferrofluids, energy harvester designs no longer need solid structure. One simple example of ferrofluid based energy harvesting is to place the ferrofluid inside a container to use external mechanical vibrations to generate electricity inside a coil wrapped around the container surrounded by a permanent magnet.[31]

Through Faraday’s law of electromagnetic induction, voltage is induced in the coil of wire due to change in magnetic flux.[31]

Future possible dangers of nanoparticles to the human body have not stopped research,

Several ferrofluids were marketed for use as contrast agents in magnetic resonance imaging, which depend on the difference in magnetic relaxation times of different tissues to provide contrast.[15][16]

The deliberate synthesis and manipulation of nanomaterials—began in the 1980s. Today thousands of ENMs are manufactured in a kaleidoscope of substances, shapes, and sizes for use in a wide range of products and industrial processes that take advantage of their novel physical, thermal, optical, and biological properties. These properties may be determined by the ENM’s chemical composition, size or shape, crystal structure, solubility, adhesion (the force that holds the nanoparticle components together), or surface chemistry, charge, or area.Significant  progress has been made so far in nanotechnology for the diagnosis and treatment of cancer.

A variety of magnetic nanomaterials has been developed to achieve improved efficacy in cancer therapy as well as reduced side effects compared to conventional therapies. The interest in MNPs is due to their unique magnetic properties; they exhibit diagnostic tool, drug carrier and heat generator for therapy in magnetic resonance imaging (MRI), so-called ‘theranostic’ and their small sizes, which allow the particles to reach most biological tissues. Currently, iron oxide nanoparticles (IONPs) are the most explored MNPs for magnetic hyperthermia, because of their lack of toxicity and their known pathways of metabolism (Tran et al. 2012a, b).

The generation of heat by the exposition of MNPs to a non-invasive alternating magnetic field (AMF) can be used to destroy tumor tissue, given that heat promotes cell apoptosis through irreversible physiological changes (Prasad et al. 2007).

This approach is known as magnetic hyperthermia.

Research shows that the nanoparticles introduced into the body for diagnostic imaging, are flushed from the body within a month.