I keep seeing Blavatnik everywhere. I hate that. Perhaps there are many lookalikes, but here’s another one, the redhead at 3:50 saying ”medier” instead of “media”.

The redhead acts like it’s the handler of the “royals”. I can’t locate where she/he is identified in the above video so I did a search for the Royal Staff and got totally sidetracked by the Tiara.

But before getting into the Tiara and the missing Romanov jewelry, Blavatnik’s wife needs to be mentioned.

Blavatnik’s wife looks exactly like a classmate of mine at Mt. Carmel, two pdf’s above of a business of which she is an officer, with the address on Myrtle Oak Dr., New Iberia where she lived when I knew her.  She left for another school before graduating. Her father was Dr. Lewis Bernard, as far as I knew and she had one or two brothers. I’ve been told that this is the same family as CH Bernard who owned the paper mill in New Iberia that was sold to Charles Boldt.  However, there are two different families with the Bernard surname, so I have some reservations about this claim.

Since Jeanne was very friendly with Randy Whatley, they already knew each other  when she arrived in Baton Rouge in the early 1980’s,  and since she soon afterward married a banker in Paris, it wouldn’t surprise me if this is she.

Back to the tiara, discovered in an article entitled:
“Chaos as Meghan Markle and Prince Harry lose THREE staff members in six months
Please tell us they’re not horrible bosses?”
NOV 12, 2018 11:00AM

“Meghan had her heart set on this tiara with emeralds and Prince Harry hit the roof when they were told it was impossible for her to wear it,” a spy told The Sun.

[One must be careful with stolen goods] 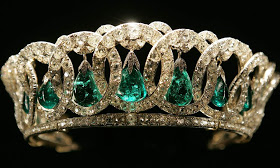 The Vladimir Tiara
“As the origins of the tiara couldn’t be 100 per cent confirmed and with fears it could have questionable ties to Russia, the Queen apparently would not loan it out.
And it did not go down well.”

So Megan Merkle had a melt down because she wanted to wear  the Russian Crown and Queen Elizabeth doesn’t want to get caught having received stolen goods now that there’s a new sheriff in Russia.

“The 1925 catalogue was a clear and direct response. “We’ve still got it all comrade,” the carefully documented inventory of the treasures declared. And then, not long after publication, most of the copies disappeared. “Too much information out there,” my source, a well-known jewelry expert, surmised, “could be compromising.”

The Fersman catalog states that the jewels, considered national property, would never be “sold or done away with.” Because the new Soviet Union desperately needed capitol, however, copies of the catalog were sent to potential jewelry buyers anyway. Although the treasure was later removed from the market, some of the pieces were sold to a syndicate and eventually wound up at auction at Christie’s London on March 16, 1927. The majority of the collection remains in Russia at the Kremlin Diamond Fund in Moscow.
“Nine huge strong-boxes crammed with gems (and strange to say, without a single inventory to them) were brought to light from the recesses of the Moscow Armory Hall and placed at once in the safe-keeping of the People’s Representatives,” according to the catalog’s foreword. The catalog project was overseen by noted mineralogist A.E. Fersman, with the help of specialists, experts and jewelers including Agathon Fabergé from the House of Fabergé.”

“Of the 406 separate pieces in the treasure, 110 are documented as having come from the reign of Catherine II (1762-1796) and her son Paul I (1796-1801). The treasure is comprised of the Imperial Sceptre set with the approximately 190 carat (ct) Orlov diamond, the Imperial Globe set with an approximately 200 ct Ceylon (Sri Lanka) sapphire, the Great Imperial Crown featuring an approximately 402 ct spinel, the Imperial Nuptial Crown, chains, stars, crosses, emblems, diadems, necklaces, brooches, rings, earrings, as well as loose diamonds, emeralds, sapphires, rubies, spinels, pearls and alexandrites.”